How I Turned From “Being Stuck in Russia” to “Oh, No Thanks, I’ll Stay!”

How I Turned From “Being Stuck in Russia” to “Oh, No Thanks, I’ll Stay!”

When you find yourself ‘stuck’ in a country and your visa gets frozen three times and a 90-day stay turns into a 365-day one.

March the 7th. I am flying into Saint Petersburg from Delhi. From my second home to one of my “office” countries. In a few hours, I went from 30 humid degrees Celius to below zero, snow, and my usual reverse cultural shock. In the past few years, this route has seemed to be quite usual for me, going from my favorite place in the world to my work duties locations.

This time was different. This time the long queue at the Indira Gandhi airport’s custom was crowded with the usual huge suitcases and flattering colorful saris, but also with an atmosphere filled with anxiety, worries, and the prototypes of what is now our main accessory (masks of every color and shape).

Before flying to Russia for a week of work meetings I couldn’t hide the fear of getting stuck in Russia, in the middle of the border closures that happened all around the world at that time in March.

My fears turned to reality a week later as I stood waiting to board my flight at the Moscow airport, trying desperately to get out of the country. My flight to Pakistan on Emirates was operating, and the Karachi airport was still open by the time my flight was leaving Russia… but maybe not much longer after that.

The morning had been spent in frustration leading up to the point when the very last call for passengers came from the speakers, when all the luggage had been stowed, and it was just me, kept outside the gate, staring at the gate attendant, both of us waiting for the call on the radio to let me board (or not).

I could not tell what scared the staff the most: my Italian passport (Italy those days was experiencing the highest number of Corona cases so far), or my destination.

The engine of the plane was already running, everyone sitting waiting only for me.

Finally, the patient brunette Air Arabia gate attendant let me pass by after asking me if I was ready to run the risk of being stuck in the Emirates on the way, and with the likelihood of being sent to my home country.

Making it just a few steps down the jet bridge, I stopped for a moment to think, and turned to ask to remain in Russia.

I walked back to the gate, watched my backpack come out from the cargo hold, and the plane slowly depart straight after. I busted into tears.

After calming down I finally managed to exit the departure area of the airport (which by the way, is clearly not made for going backwards).

I repeated what I have done a dozen times but oppositely, without even thinking, like an automaton. I caught the train back while I was thinking where to start my next new, unexpected, unplanned life in Russia. I called friends, I made lists, I thought where I could go, which city, which accommodation, and the visa, the bureaucracy, and my job.

A trillion questions kept me busy from Moscow airport back to Saint Petersburg, something like 12 hours later. I was still thinking how all of that was only a temporary situation. I told my friend (who kindly let me stay in her apartment) that I was probably going to be there for only a couple of weeks.

I left her apartment in August. And it is now November and I am still in Russia.

This has been the story of how a short work trip ended up shaping my whole year in Russia. Later on, many decisions taken very instinctively made my time in the biggest country in the world probably the best of the last few years and it is still shocking to notice how this turned from “being stuck in Russia” to “No, thanks, I will stay here”.

I have been traveling and working and hanging around Russia for the past two years, and it is a country I am still getting to know. It is a place to appreciate slowly, day by day. It grows in you and with you. I love it, I hate it, I struggle, I am excited, I am scared, annoyed, and happy.

One of the million thoughts that came up in those 2 seconds while walking down to the plane and made me turn around was the fact that If I have to choose where to be stuck, Russia would have been probably a good option: there is enough to explore, there are enough friends, cost of living is affordable and there is enough for me to learn and keep me busy while I will finally master my Borsht cooking skills and maybe stop fighting with one of the most difficult languages I ever approached.

My visa was supposed to last for only 90 days. It has been “frozen” three times allowing me to stay now for one year.

It has been the best and the worst. The first phase was the Spring, the “Russian Spring” when the well-known capricious Saint Petersburg weather gifted me grey, snowing days until May. I spent the first three months in an almost total state of solitude which pushed me into a strict routine. I spent days baking croissants, pizzas, and all those dishes which requires time and patience, I watched every possible youtube video about unknowns, mysterious ancient Turkic populations, exercised a lot, walked around the district in mental states which brought me from tears to joy in a very short time, through snow, sun, heavy rain, cold and warm.

The first months taught me how to deal with this new uncertainty, instability, insecurity which, for the first time, did not come from my own choice of lifestyle but from something else no one could control.

By the end of May the quarantine lifted, the days started getting longer, the sun shining timidly and my patience running low. Russians live for their short, intense, warm summers. So I did.

I finally decided to go exploring the North, trying to catch as much as I could of those White Nights which has been obsessing me since I was a kid. No tourists, no work, and the biggest country to explore. So this was the second part of my “Russian Covid experience”. From June, right after my birthday, to the end of August, I have been moving from The lakes of Karelia to the Arctic ocean to the Altai mountains next to Mongolia.

I spent days and nights in the forests, camping in the wilderness, hitchhiking towards the Arctic circle, swim in every possible lake we found along the way, sleeping in our little tent along the highway and on top of the mountains, we lived a week on a deserted island, with fire as the only commodity and endless naked swims.

My travel companion was a girl who ended up being the British, younger version of me who never says no to Adventures, freezing water swims, cold dinners and wet hitchhike runs. We met some of the best friends we could wish to meet, who later became the main characters of my third Russian chapter.

After the slow, meditative, lonely phase and the joyful, “back to life” one, here we are now, to the third one.

After spending a couple of weeks back in Saint Petersburg, I realized there was absolutely no point for me being in a city of 5 million people. A lovely one, sure, vibrant with art, culture, and music but still, with way too many people, cars and attractions for my taste.

So I embraced the biggest opportunity that comes with being a Digital Nomad and I moved to the smaller capital of Karelia. A town of 300,000 people on the shore of a lake surrounded by forests, and a six hour drive North of Saint Petersburg.

I was walking there, along the lakeshore in June, at the beginning of our road trip to the North telling my friend how surprisingly good feelings and vibes I was getting from the city, and was thinking what such a good place to live in… and so it happened. During the past months I have been coming back and forth a few times, spending days or weeks in this relaxed, cozy, quiet city where there are no skyscrapers covering the view of the lake, and where the snow comes early and people recognize each other on the streets.

Yes, in the past nine months there were some opportunities of catching very expensive flights to leave the country or attempt to exit via overland but honestly, my “being stuck” in Russia for all the reasons (and more) I listed above turned into a “decided to stay and enjoy Russia”.

So here we are, nine months later, a lot of moving, way too many thoughts, knowledge, a degree course started, many kilograms of goodies baked, an old apartment refurbished and to live in. The coldest winter of my life approaching and a new company of friends. Because at the end of the days, what makes a difference to us Digital Nomads are people more than anything else. In a life full of opportunities, changes, moving around, kilometers walked, flights caught, a life fit in a bag, the difficulty in balancing adventures and routine, etc… at the end of all of this it’s the people that what makes the difference.

They are what, in a lot of cases, make us leave or stay, turning from “being stuck” to “being happy here”. 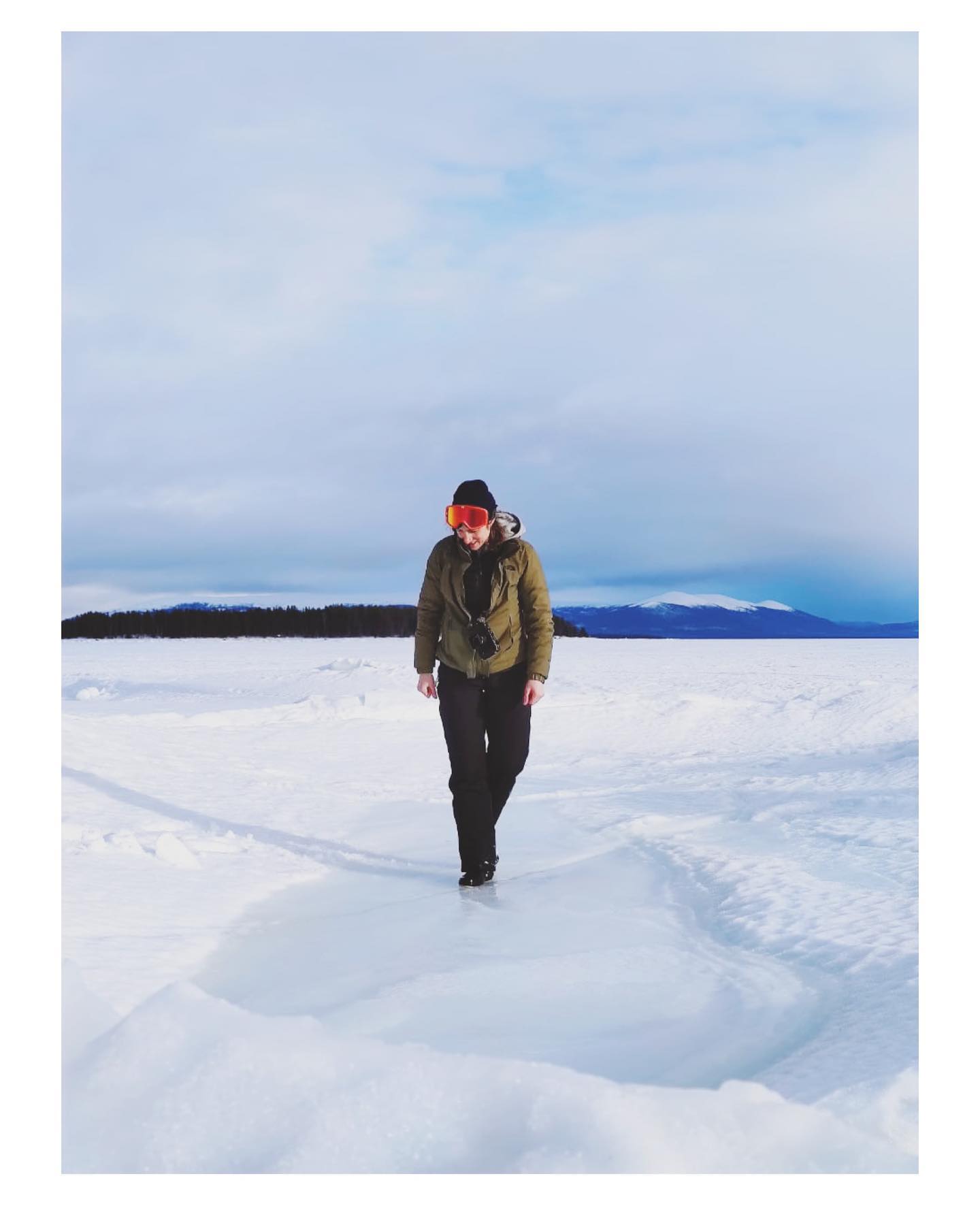